The North Wales County of Denbighshire lies on top of a carboniferous limestone escarpment. In the late eighties, during construction of the A55 Chester to Bangor Trunk Road, a number of large voids, known as swallow holes, were detected beneath the rock surface.

Swallow holes are fissures in chalk caused by rainwater dissolving and enlarging small joints and faults. Chalk is almost insoluble in pure water, but rainwater contains a small amount of dissolved carbon dioxide from the air and is a weak carbonic acid. Over very long periods this acid water percolating through small fissures in the chalk enlarges them and may eventually work its way to the surface, causing the surface to collapse into the hollow. Without a repair strategy in place this cone shaped depression then concentrates and increases the flow of water so exacerbating the problem.

Unfortunately for Denbigshire, swallow holes occur only in limestone rocks, of which chalk is a form.

Swallow holes can exist down to 5 metres deep and can be as wide as 3 metres in diameter. The construction of the A55 trunk road therefore had to include the addition of a surface membrane (geotextile webbing) to alleviate cracking.

Even so, it is impossible to predict where the swallow holes are until a depression becomes evident.

In this particular case, the carriageway depression only covered a small area. Being small the larger contractor is not normally interested in getting involved and the depression has traditionally been dug out, filled and levelled in order to keep disruption to a minimum. Treating the symptom in this way has also been considered as a cheaper option rather than treating the cause. However, experience shows that the depression will reoccur meaning another repair and another road closure. All of which means more cost.

The area where the depression existed spanned the two lanes of the westbound dual carriageway and a 1 metre wide verge of the A55 Trunk road at Glan Llyn. The length was approximately 10 metres, giving an overall area of 8.3m x 10m.

Denbighshire County Council decided that they needed to introduce a more sophisticated solution and address the cause. We were called in to discuss the problem.

Utlising the County Councils road traffic management contractors, a priority was to ensure that one lane of the carriageway could remain open throughout the operation.

Working with the engineer at Denbighshire County Council we were able to formulate a repair strategy which involved drilling a series of holes on a one-metre grid in both directions to a depth of 600mm to break the geotextile webbing.

4.6 metre long grouting probes, manufactured with grout injection ports running the entire length, were then driven into each hole to a depth of 5 metres. Couplings were fixed to the tubes to enable pneumatic hammers to deliver the tubes to the required depth.

Packers were inserted into the tube at 600mm below ground level.

Pre-bagged cementitous grout was mixed and transported from the grout pump down the steel tubes and delivered to the swallow holes via the injection ports. Grout was then injected until refusal or until it could be seen bleeding from adjacent holes.

Once grouting was complete the holes were filled with a suitable polymer modified repair concrete and the final road surfacing reinstated to line and level.

Peter Brunton, from the engineering department of Denbighshire County Council has reported back his satisfaction at finding a solution that has been extremely effective in terms of cost, logistics and minimal disruption. Whereas they had previously been looking at a re-tarmac every six months, they would only have had to do this three times and they would have more than covered the cost of such a complete repair solution. 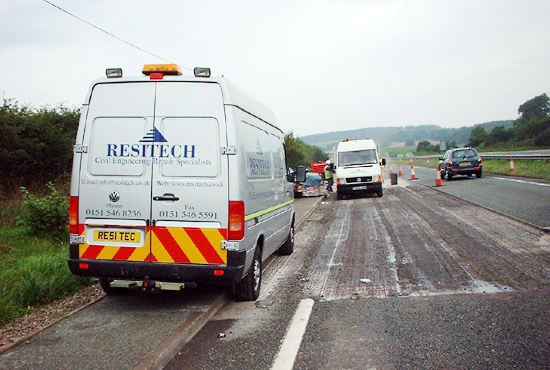